On Monday June 29, Colorado Governor Jared Polis signed HB 1424 into law, which allows him to mass-pardon Coloradans who have been convicted of minor marijuana possession. The law also expands the social equity program for marijuana business licenses to Colorado residents who have been arrested or convicted for a marijuana offense, lived in an area designated as high crime or economically disadvantaged, or have a certain level of income.

This legislative achievement is an outstanding step forward for Colorado. Before providing legal and consulting services to marijuana companies across the world, I cut my teeth serving as a federal prosecutor and defense attorney in the United States Marine Corps, a Colorado narcotics prosecutor, and a DEA Drug Task Force Commander. After recognizing the power of cannabis as a commodity, I used my experience to help companies navigate the maze of regulations that govern the industry so that their businesses can flourish. The success of the “Green Rush” has created a worldwide multi-billion dollar industry, generated millions in tax revenue for state governments, and led to the development of real medication that can help children who suffer from severe seizures and my fellow veterans who suffer from PTSD. But piecemeal marijuana reform in the United States is still an obstacle to recognizing the full potential of cannabis and undoing the damage caused by the war on drugs. This law affirms cannabis is heading in the right direction.

The goal of the bill is to provide more access to the marijuana industry to people of color while removing marijuana-related convictions that would be legal today from people’s criminal records so that they are no longer burdened by punishment for violating an unjust law.

My clients have made millions working in an industry I once would have sent them to prison for. Even after legalization, some individuals are applauded for running successful marijuana businesses while others serve sentences for the same behavior. Eliminating criminal penalties for drug use and possession is imperative to overhauling the criminal justice system, and it is the State’s responsibility to make amends for destroying lives simply because someone had two ounces of weed.

The bill also created a statewide definition for which businesses qualify as cannabis social equity license applicants. This allows them to take advantage of an existing accelerator program in which business owners use existing cannabis facilities to build their companies. The new law allows people to apply to the social equity program if they lived in a designated economically distressed community for a minimum of 15 years between 1980 and 2010, if they or an immediate family member has been arrested or convicted for a marijuana offense, or their income is at or below a certain amount to be determined through rule-making. The bill’s sponsor, Rep. James Coleman, said that “all hardworking Coloradans deserve a fair shot at sharing in the prosperity of the booming marijuana industry.” I agree.

Since the nationwide legalization movement began, Colorado has been a leader in progressive changes to outdated cannabis laws and innovation in cannabis business. Colorado’s expansion of license ownership and criminal justice reform are creating more opportunities and helping shape the entire marijuana industry. As more states and counties legalize cannabis, they can look to Colorado as an example of how to successfully create a thriving marijuana market and effect change to remedy the harm the war on drugs has caused for decades. 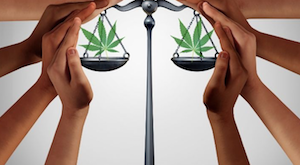