If the average tax on Illinois’ recreational cannabis is 35 percent, based off the first day of sales, taxpayers paid more than $1.1 million for the privilege.

“It was $3,176,256.71 in sales and for me that means there’s a significant chuck that’s going right back into the communities,” Hutchinson said. “So for me, I’m excited about all of it.”

….and more came in day two with the Chicago Sun Times reporting

Although sales were down by almost a third, there were still 56,762 transactions reported Thursday. 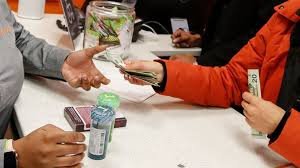