Wttw.com report……….Hutchinson has been tapped by Gov. J.B. Pritzker to take on a new, $220,000-a-year role as the state’s cannabis regulation oversight officer – or, as most headlines put it: “cannabis czar.”

Appointed to the Senate in 2009, Hutchinson has long pushed for legalization and to include so-called social equity goals in the legislation, including ensuring that people with low-level marijuana convictions have their records expunged and that minority-owned businesses get their share of the legal marijuana trade.

When the new law takes effect, residents of Illinois will be permitted to possess up to 30 grams of the cannabis plant, 5 grams of concentrated cannabis and no more than 500 milligrams of THC in a cannabis-infused product. (THC is the main psychoactive component of cannabis.)

Visitors to the state will be permitted to possess half the amount of cannabis allowed for Illinois residents.

The possession limits are cumulative.

See TV interview at link below on her appointment

Also see her talk about Cannabis Banking earlier in the year ( start 5:25) 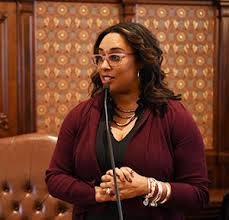