Cannabis legalization has a solid chance of advancing in Rhode Island in 2021, two top House lawmakers said in a new interview.

Incoming House Speaker Joseph Shekarchi (D) said on WPRI-TV’s Newsmakers program on Friday that the chamber is “very close” to having majority support for the policy change and that he’s “absolutely” open to the idea.

Rep. Christopher Blazejewski (D), who party colleagues recently voted to install as House majority leader in the next session, said the policy is “certainly something we’ll take a look at,” noting that he cosponsored a bill to legalize cannabis in the past, and that “certainly the issue has come a long way in that time.”

“I remember many years ago we would have trouble finding people cosponsoring it. Now we have the Senate leader and a Senate president seemingly fully endorsing it, so it’s an issue that’s really come a long way,” he said, referring to recent comments from leaders of the state’s other legislative chamber. “I think we have much more experience around that, with other states to draw upon, but it’s something we’re going to take a look at, especially with all of the many budgetary issues that we’re facing.” 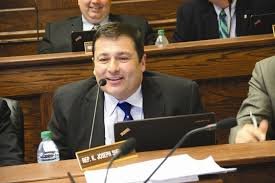