The Hindu Newspaper reports………Ecstasy tablets, LSD stamps and cannabis worth ₹58.5 lakh were seized by the Chennai Air Customs, and two persons were arrested.

Officials opened a postal parcel, which arrived from Spain at the Foreign Post Office, on suspicion that it could have narcotics. It contained a cardboard box with a greeting card and two silver pouches that had pink tablets which were suspected to be MDMA pills. In all, 994 MDMA tablets, worth ₹50 lakh, were found and the greeting card had a plastic packet within which there were 249 lysergic acid diethylamide stamps worth ₹6 lakh.

“The parcel was addressed to a person residing in Puducherry. A team conducted searches at the address. Two persons — Rubakmanikandan and Loy Viegus — were arrested and two packets of Guntur cannabis (ganja) were found. About 5.5 kg of ganja was seized.

Rubakmanikandan, a freelance mural artist, and Loy Viegus, who works in a chicken farm, were arrested and remanded in judicial custody. 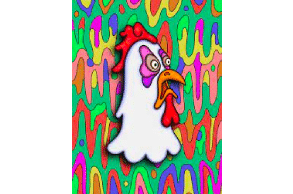