Here’s the introduction to their piece that we believe should be read in full as it is an issue that is blowing up all of the US and if things carry on the way they are as well as criminal investigations class actions could be further down the line..

Thousands of illicit THC vape cartridges seized by police across New York underscored the booming marijuana black market being investigated as a potential cause of mysterious vaping-related lung illnesses.

The THC vape busts have spanned everything from music festivals and routine traffic stops to drugs being mailed into New York from legal weed states like California, according to USA TODAY Network reports and police records.

As public health officials across the country warned of nearly 200 lung illnesses possibly linked to vaping THC, a review of marijuana arrests in New York revealed the scope of safety risks tied to underground cannabis trade.

Health officials last week announced 25 of the lung injury cases are in New York, including many that reported vaping tetrahydrocannabinol, known as THC, the psychoactive element of marijuana.

Authorities have emphasized, however, that many of the vaping injuries in New York and nationally also involved using nicotine products, which remain a potential culprit behind the spate of severe respiratory illness that has hospitalized many patients and killed one in Illinois.

Meanwhile, health officials have urged Americans to stop using vaping devices altogether until a cause is determined, according to the U.S. Centers for Disease Control and Prevention.

During the investigation, the vaping devices, commonly called e-cigarettes, shouldn’t be used to ingest nicotine, THC or cannabidiol, known as CBD, the non-psychoactive element of cannabis products, CDC officials said.

“If you use #ecigarette products, monitor yourself for symptoms (e.g., cough, shortness of breaths, chest pain) and promptly seek medical attention if you have concerns about your health,” CDC Director Dr. Robert Redfield wrote on Twitter. 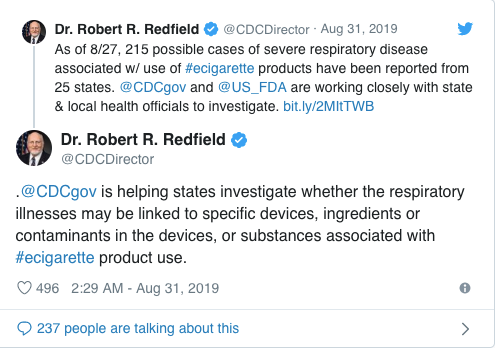 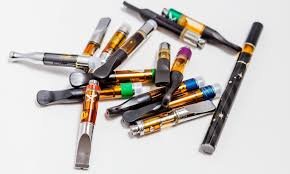