Ireland: Cannabis plan for State-owned bogs goes up in smoke

Proposals to transform Ireland’s State-owned bogs into vast cannabis farms have gone up in smoke, it has emerged.

Bord na Móna last year held meetings with then minister for health Simon Harris and then minister of State for natural resources Seán Canney about giving over thousands of hectares of its landbank to cultivating marijuana for medical use.

A feasibility study was ordered into whether farming the drug could replace traditional turf-cutting by the semi-State body, which is undergoing a “Brown to Green” strategy to switch to a low-carbon, sustainable business model.

However, the company has confirmed it is shelving the plan for the foreseeable future as it prioritises other projects – such as re-wetting bogs – in an attempt to safeguard hundreds of jobs, mostly in the midlands, over the coming years.

A key stumbling block in the proposal – which was supported by both Mr Harris and Mr Canney – are the regulatory approvals that would need to be secured to supply markets both at home and overseas.

Mr Canney, Independent TD for Galway East, described the “mothballing” of the plans as disappointing but added that he was assured existing projects at the semi-State would safeguard employees for the short term. 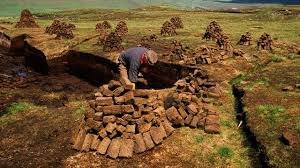