We thought we’d just relay this story to dispel the romantic notion of Ireland in most north Americans minds. That it is a place of bucolic rolling green fields, pubs overflowing with Guinness and happy lucky go chappies out for a craic whilst they pluck away at a fiddle.

Actually – this is reality

Drug dealers are operating like a 24-hour drive-through in an estate in Limerick where taxis form queues as people from all over the region buy their drugs, the Dáil has been told.

He warned that urgent intervention was needed or Limerick could return to “the very dark days” of the mid-2000s when the city suffered significant drug deaths, lawlessness and fear of criminal drug gangs.

Mr Quinlivan said St Mary’s Park area is like a “non-stop drugs supermarket” and the estate feels “as though drugs and drug gangs have taken over and, worse still, seem to operate with impunity”.

Urging the Government to take action, he called for a specific task force modelled on successful ones in parts of Dublin and he suggested that the Defence Forces could be called in as they were to assist the Criminal Assets Bureau last year.

In a graphic description of life in the estate, he said “these drug dealers ignore planning regulations regularly, building unauthorised structures that need to be removed” but despite Garda requests, they remain in situ as “warehouses of the wicked”. 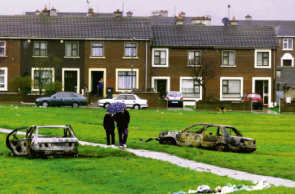