Will The NZ cannabis referendum succeed… Which way is the wind blowing?

First things first. It won’t be until 30 October that we know the result of the referendum.

That said we have had a couple of polls prior to the vote.. this one conducted by Horizon Research appears to give a good indication of where NZ is  going.

Commissioned by Kiwi medicinal cannabis company, Helius Therapeutics, the latest Horizon Research survey has indicated that 52% of all respondents said they would vote in support of the Cannabis Legalisation and Control Bill, while 47% would vote against. This result would mean a small majority of around 139,300 votes for the bill, with 53% of females and 51% of males in support . 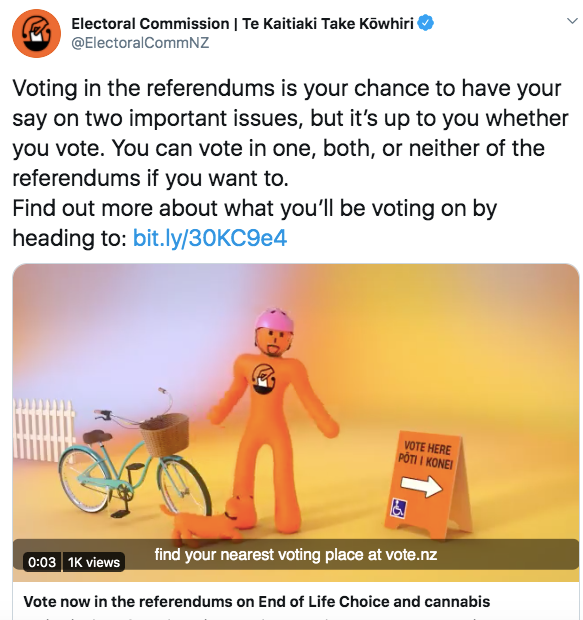 With early voting now open, an independent survey of nearly 1,500 Kiwis shows the referendum on legalising the personal use of cannabis is incredibly tight when respondents are forced to take a yes or no position.

When asked to make a choice between supporting or opposing the Cannabis Legalisation and Control Bill, 52% of all respondents said they would vote in support, while 47% were against. This result would mean a small majority of around 139,300 votes for the bill, with 53% of females in support and 51% of males. Commissioned by New Zealand’s largest medicinal cannabis company, Helius Therapeutics, the latest Horizon Research survey marks the eighth in a series of comprehensive surveys tracking nationwide opinion on cannabis law reform.

The same survey, conducted in late August, produced a dead heat with 49.5% in support and 49.5% opposed. In fact, the ultimate referendum result, due two weeks after election day, is still too close to call. The survey’s two-year trend lines for both ‘for’ and ‘against’ have now effectively converged.

“The ‘yes’ vote has firmed up slightly, but it’s still looking very close, with public opinion set to keep shifting right up until voting closes on the evening of Saturday, 17 October,” says Paul Manning, Chief Executive of Helius Therapeutics.

“The quality of debate and the strength of arguments for or against legalisation in the next two weeks are now critical. Turn-out of 18 to 34-year-olds will also be key. Young adults are the strongest supporters of the bill, but they also have the lowest registration and intention to vote,” says Mr Manning.

When all respondents were initially given an ‘I’m not sure’ option, 9% chose it, 46% supported the bill, 42% opposed it, and 2% said they would not vote in the referendum. Support was up from 44% in August, and those not sure was down from 12%, with females (12%) now twice as more likely to be unsure than males (6%) on how they would vote

“Nearly one in 10 New Zealanders remain uncertain about how they’re going to vote on cannabis legalisation, and that includes totally committed election voters. Again, both camps’ ability to reach and connect to the public in the coming days will be absolutely critical to the referendum result. It’s staggering that nearly 300,000 Kiwis have yet to make up their minds, which makes it quite exciting but also somewhat unpredictable,” says Mr Manning.

In the previous August survey, legalising the personal use of cannabis had achieved majority support among all respondents aged 18 to 44 years old. The latest survey, however, showed there is now overall support from those under 55 years of age, with the majority of 45 to 54-year-olds now backing the bill.

What’s more, the youngest voters, 18 to 24-year olds, now seem to have made up their minds on how they will vote, with those unsure down from 19% in August to now 5%.

Intending Green Party voters for Election 2020 are the strongest supporters at 97% for, 2% against. They are followed by Labour voters at 65% for, 35% against; Act voters at 42% for, 57% against; New Zealand First voters at 36% for, 64% against; with intending National voters the strongest opposers at 22% for and 78% against.

“Kiwis look set to vote along partisan lines. However, past surveys have shown that even those against legalisation overwhelmingly agree that prohibition of personal use cannabis has been an abject failure in this country. And most Kiwis accept that the continuation of the status quo won’t improve anything,” says Paul Manning

“The Cannabis Legalisation and Control Bill is not about liberating cannabis. It’s already well entrenched across society. Rather, this vote is about harm reduction and strict regulation, with the state in control, not the gangs. Voters now have a lot to weigh up,” he says.

Commissioned by Helius Therapeutics and carried out independently by Horizon Research, the results are from a nationwide online survey of 1,481 respondents conducted between 24 and 28 September 2020.

This report tracks the results of a series of nationwide online surveys of adults representing the 18+ population of New Zealand. Respondents were members of Horizon Research’s HorizonPoll panel and a third-party nationwide research panel, both of which represent the adult population at the 2018 Census. Results are weighted by age, gender, highest education, personal income, employment status and party vote at the 2017 election. At a 95% confidence level, the maximum margin of error is ±2.6%.

Helius and Horizon’s tracking of public opinion on the referendum over the past 23 months makes it the most significant series of surveys on the issue. Support was first recorded at 60% in November 2018. Last year support was at 52% in April; 39% in August; and 48% in November. This year it was at 54% in February; 56% in June; 49.5% in August; 52% in September.

Key results for all respondents

Intended Party Vote 2020:
Source:  https://www.helius.co.nz/post/cannabis-referendum-support-lifts-to-52-many-remain-undecided
Across the Tasman Australia is still stuck in the 1950’s.. In more than one way at the moment. Cannabis is currently  a microcosm of Australian right wing politics where the legality of cannabis isn’t to be discussed, gas is the solution to climate change, refugees are to be banned even after the news that Australian population growth will now be in negative for the next decade or longer .. and so on and so forth.
This article in the New Daily suggests the tide is turning. We’d be somewhat less positive

In addition to deciding the fate of their political representatives on Saturday, New Zealanders also cast their votes on the burning issue of cannabis legalisation.

While the results of that referendum won’t be known until October 30, it has already sparked conversation across the ditch, with both pro- and anti-cannabis law reform campaigners in Australia watching closely.

New Zealand’s cannabis referendum has been on the cards since 2017, when Jacinda Arden won the support of the country’s Green Party by agreeing to put cannabis law reform to a national poll.

In the months leading up to the poll, former NZ prime ministers came out to bat for both the Yes and No sides.

Labour’s Helen Clark has been a staunch pro-cannabis campaigner.

The former PM described the legalisation of cannabis as a “no-brainer”.

In addition to deciding the fate of their political representatives on Saturday, New Zealanders also cast their votes on the burning issue of cannabis legalisation.

While the results of that referendum won’t be known until October 30, it has already sparked conversation across the ditch, with both pro- and anti-cannabis law reform campaigners in Australia watching closely.

New Zealand’s cannabis referendum has been on the cards since 2017, when Jacinda Arden won the support of the country’s Green Party by agreeing to put cannabis law reform to a national poll.

In the months leading up to the poll, former NZ prime ministers came out to bat for both the Yes and No sides.

Labour’s Helen Clark has been a staunch pro-cannabis campaigner.

The former PM described the legalisation of cannabis as a “no-brainer”.

“Stop wasting our taxpayers’ money with police helicopters hovering over the Kiwi bush, hounding ordinary citizens who are having a joint of cannabis rather than a glass of wine,” Ms Clark said in July.

On the other side of the aisle, ex-National Party Prime Minister John Key passionately defended the ‘no’ position, saying on NZ radio: “If you want to see more drugs in New Zealand society, vote yes. But if you don’t, vote no.”

The referendum was watched closely by progressive politicians and campaigners in Australia.

Leader of the Australian Greens and federal MP for Melbourne Adam Bandt said the the era of cannabis criminalisation was coming to an end.

“The NZ Greens, in government with Labour, have put recreational cannabis on the agenda this election, and the same can happen here,” Mr Bandt told The New Daily.

At the moment, only ideological blinkers have prevented the major parties from embracing recreational cannabis, but the tide is turning.”

Legalising cannabis would put $4 billion back in the public purse ‘just when we need it most’, Mr Bandt said.

“The Australian Government does not support legalising cannabis for recreational use,” a spokesperson for Health Minister Greg Hunt told The New Daily.

While many Australians “may view cannabis use as harmless, almost a quarter of Australia’s drug and alcohol treatment services are being provided to people identifying cannabis as their principal drug of concern”, the spokesperson said.

However, the spokesperson also pointed out that “issues relating to legalisation or decriminalisation of cannabis are predominantly matters for the states and territories.”

Mr Bandt said the Morrison government was missing the opportunity to ‘smash’ criminal gangs while creating employment by legalising cannabis.

“By failing to recognise the benefits of legalising recreational cannabis, the government is ignoring the massive benefits of a controlled industry,” he said.

35 per cent of Australians have tried it or used it socially, but Australia’s prolific usage is currently only supporting the black market.”

For the first time, the 2019 National Drug Strategy Household Survey showed that more Australians now support the legalisation of cannabis (41 per cent) than oppose it (37 per cent).

“There’s a lot of support in the community,” she said.

“At the moment the states and territories are responsible for drug policies.

“Depending on what state you’re in there are different consequences for using it.”

The Australian Capital Territory became the first state or territory in Australia to legalise cannabis a year ago, and police data shows there has not been any meaningful increase in cannabis-related arrests since.

South Australia and the Northern Territory both decriminalised cannabis for personal use three decades ago.

On the flip side, Queensland has some of the strictest cannabis laws, Professor Lee said.

“Police can choose to send you to education or treatment, which is known as diversion, rather than to charge you.”

In Victoria, Reason Party leader Fiona Patten is currently chairing a parliamentary inquiry into cannabis use in the state.

“We are considering how you manage cannabis use in the most effective way,” Ms Patten said.

New Zealand is simply “following the trend happening across the world”, she told The New Daily.

The whole of the Pacific coast of America from Canada to Mexico have legalised and regulated cannabis,” Ms Patten said.

“Now we are seeing one of our closest Pacific neighbours follow.”

Australians under the age of 30 are “twice as likely to use cannabis than tobacco”, Ms Patten said.

“This isn’t about whether cannabis should be available … this is about how governments can regulate it and keep it out of the hands of criminals and children,” she said.

There are many different approaches to cannabis legalisation around the world, Professor Lee explained.

“There is the ACT homegrown model, where one person is allowed to grow four plants for personal use, there are social clubs in Europe, there’s a very free market operating in the US, and there’s a more restricted market in Canada,” she explained

There is one overwhelming similarity, however, and that is that cannabis legalisation does not cause a big increase in usage.

“One of the biggest harms from cannabis is contact with the legal system,” Professor Lee said.

“When you decriminalise it or legalise a drug, it means people don’t come in contact with the criminal justice system and that significantly reduces harms.” 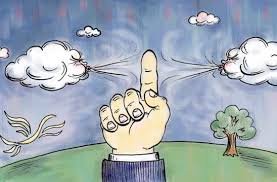