Translated From Italian By Google Translate

The news was communicated directly by the lawyers Claudio Miglio and Lorenzo Simonetti at the end of the hearing that was held at the Court of Arezzo: Walter was acquitted, because  the fact does not exist .

And it is a sentence that, also given the request for acquittal by the prosecutor, puts an end to this matter, pending the appeal process of the friend who bathed his plants, who instead was sentenced in the first instance to 1 year and two months in prison.

But now a new chapter is opening for the battle in favor of patients.  Antonella Soldo, coordinator of the Meglio Legale campaign, remembers it with these words: “Walter is acquitted but the case is not closed, there are many others open and there will still be more if the laws do not change. The story of Walter De Benedetto denounces the fake war on drugs taking place in our country. This is propaganda that affects the weakest , the most fragile. In these situations there are many patients and consumers while the drug traffickers are left free to act, having in their hands the monopoly of substances ”.

After accompanying Walter in this complex period, with the direct appeal to President Mattarella supported by over 20 thousand signatures , Meglio Legale was present yesterday in front of the court, together with the Luca Coscioni Association, the Parliamentarians Hon. Caterina Licatini (M5S) and Hon. Riccardo Magi (+ Europe, in the photo opposite), the Secretary of Italian Radicals Massimiliano Iervolino, representatives of Volt and Young Democrats of Tuscany.

Also present was the musical group Matti delle Giuncaie who dedicated a song to the story of De Benedetto, “Matto”, written by Erriquez of the Banda Bardò (who passed away last February). But the principals had been organized before the courts of 18 Italian cities, which made their applause heard when the sentence was communicated.

“The judges have recognized the terms of the fact and that there is no willingness to sell “, underlined the lawyer Lorenzo Simonetti, who defended him together with his colleague Claudio Miglio.

And satisfaction was also expressed by the new sub-secretary for anti-drug policies Fabiana Dadone: “Today is a historic day. Walter De Benedetto had set up a marijuana greenhouse to use the substance for therapeutic purposes and relieve pain. ‘That greenhouse was not a crime’ and so today the acquittal has arrived because the fact does not exist. This sentence is natural, obvious, taken for granted, just as the arguments of those who say that patients have access to medical cannabis in Italy and that everything is fine are irrational ”, wrote the Minister for Youth Policies in a long post on Facebook.

Now is the time to relaunch the battle in favor of patients by asking for medical cannabis production licenses to be finally assigned to private companies, putting cannabis at the expense of the national health service . All while in the Justice Commission the law that could make the self-production of cannabis legal is under discussion . 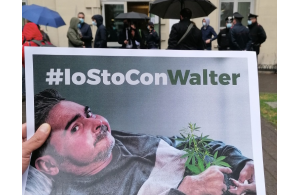