Keef Brands, founded in 2010 as one of the original cannabis-infused beverage companies and now ranked by BDS Analytics as the country’s number one cannabis beverage brand, is proud to announce Travis Tharp as the company’s new Chief Executive Officer. Tharp first joined Keef Brands in 2017 as Chief Operating Officer, was named President in 2019, and in 2020 oversaw the company’s largest year over year growth of beverage market share (by dollars sold). The transition of Tharp moving into the CEO role is the result a long-planned succession. Co-Founder and former CEO Erik Knutson, who will remain on the Board of Directors, worked with Tharp and the Board to position the company for this move and expansion. The appointment comes at a pivotal time, as Keef Brands is poised to release cutting-edge new product formulations and introduce their revolutionary wave of social consumption into more recently legalized markets across the country.

“Keef Brands continues to push the envelope in the cannabis and consumer packaged goods spaces, and I’m thrilled to oversee our incredibly accomplished and ambitious team,” said Tharp. “In my new role as CEO, I will work to accelerate the progress we’ve made in the beverage category and lead expansion into new states while continuing to amplify Keef Brands’ presence in our long-time markets. We’re on a mission to introduce both cannabis connoisseurs and the canna-curious to a contemporary wave of consuming the cannabis plant while drinking with friends.”

Tharp’s career has focused on growth stage companies and expansion in tech, cannabis, and beyond: from 2013 to 2016, Tharp was Head of City Operations for peer-to-peer home services marketplace Handy (now part of Angi), overseeing more than 30 different markets. In this role, Tharp built operations teams and workflows that were capable of handling hundreds of thousands of bookings per month and recruiting thousands of professionals per week. He went on to serve as Vice President of Marketplace Growth at HopSkipDrive (rideshare marketplace for children’s rides), leading teams for marketing, inside sales, and driver operations. Tharp holds a bachelor’s degree in economics from Northwestern University, and an MBA with an entrepreneurship concentration from UCLA’s Anderson School of Management.

In his new role as Keef Brands CEO, Tharp plans to make their products more widely available than ever before. Earlier this month the company announced its expansion into three new states – Missouri, Ohio and Maine – and currently operates in eight markets with more to come. The brand is also developing new beverage formulations highlighting alternative cannabinoids and has partnered with BevCanna to position Keef Brands’ expansion into Canada later this year.

For more information on the full product portfolio and to view the rebranded Keef aesthetic, please visit keefbrands.com. 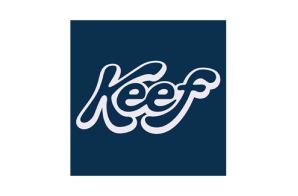