Hemp growers have filed a class action-lawsuit against a Kentucky-based hemp company after the company allegedly breached hundreds of thousands of dollars worth of contracts with the farmers.

The lawsuit, which was filed earlier this month in the U.S. District Court of Western Kentucky Owensboro Division, says Bluegrass Bioextracts contracted with hundreds of growers for their hemp to process into cannabidiol (CBD) oil. But some didn’t receive their promised payments.

Farmers are now suing the company for breach of contract, fraud, racketeering and other claims.

The suit’s plaintiffs say the many of the company’s contracts were for $4 per percent of CBD per pound of hemp. According to the lawsuit, the Bluegrass Bioextracts and its parent company, DTEC Ventures, told hemp farmers they would honor negotiated contracts “regardless of what was occurring in the market…to develop long-term relationships and good will with growers.”

The lawsuit also alleges that the company rejected hemp due to its contaminant levels even though farmers’ independent testing showed levels were acceptable.

“These deceptive acts were taken with the express intention of getting growers to change their contracts for the defendants’ benefit and otherwise increasing the defendants’ profitability and revenue, thereby causing financial gain to each of the enterprise’s constituents,” the suit says.

This lawsuit is the latest in the Bluegrass Bioextracts saga.

That was resolved in a settlement in February. WKMS reports the settlement allows the former owners to receive hemp-processing equipment from Bluegrass Bioextracts with the intent to start a seperate hemp processing company,  Precision Biotech LLC. 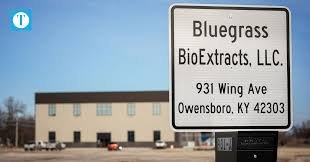