The California legislation that would decriminalize some psychedelic substances under state law, Senate Bill 519, was approved in a 5-3 vote by the State Assembly’s Public Safety Committee in a June 29th hearing. This vote marks the bill’s first hearing in the Assembly after passing in a 21-16 vote by the State Senate on June 1.

The passage of the bill through committee hearings is illustrating the compromises that lawmakers must sometimes make to get support for reform of drug laws. Before the public safety hearing, ketamine was removed from the list of the substances that would be decriminalized in the legislation. As currently written, SB 519 now includes psilocybin, psilocyn, DMT, ibogaine, mescaline, LSD, and MDMA.

Like the removal of the bill’s language about expungement prior to its Senate Appropriations committee hearing, the decision to exclude ketamine was a concession made by the bill’s author, Senator Scott Wiener, to secure the votes needed to pass.

Wiener has said that language mandating the expungement of criminal convictions related to psychedelics will be reintroduced in later legislation. According to Wiener the expungement language was omitted due to the possible cost of updating criminal records.

Wiener believes that legislators should move towards full federal decriminalization and descheduling of the substances that SB 519 seeks to decriminalize in California.

“I’m a firm believer that we need to move toward full, federal drug descheduling and decriminalization — and we can start to get there nationally by pushing forward in California, following the lead of Oregon,” Wiener told NBC News. “Decriminalizing psychedelics is one important step in that direction. Given the health benefits of these substances and the very low likelihood of addiction, we should act now to begin to change drug policies across the country.”

Ketamine has a long history as an anesthetic and is currently used by clinicians to treat depression and other mental health conditions. Opponents of SB 519 are objecting to its inclusion in the bill by characterizing the substance as a date rape drug.

“I don’t know why we would be legalizing a drug like ketamine, used to incapacitate young women and girls for the purposes of raping them,” said Melendez. “Now you’re going to take a bill, and you’re going to make ketamine legal so you can go to any college party or any bar for that matter and you have it in your pocket, no one can do anything to you. They can ask you what you intend to do with it, and you can say, ‘oh it’s for myself’ and then later on you drop it in someone’s drink, a young woman is raped and she has no idea who did it. That could be your daughter, or your granddaughter or your niece or your nephew.”

Ketamine is portrayed, without citation, as a date rape drug in the federal Drug Enforcement Admnistration (DEA) fact sheet on ketamine. This claim has been repeated by several groups opposing the bill, including in a statement by the Organization for Justice and Equality. 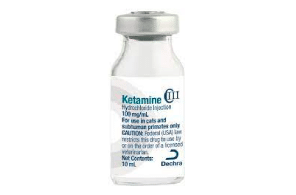