In 2018 Michigan became the first state in the midwest to legalize the possession and sale of cannabis for adult use. 2018 also marked a historic injustice when a husband and father of three was sentenced to five and a half years in prison for his operation of a Detroit city-sanctioned medical cannabis dispensary. On this episode of Let’s Be Blunt, Montel speaks to Rudi Gammo by phone from the Michigan State prison, where he has now been incarcerated for 3 years and 8 months of his 5 1/2 year sentence for a victimless cannabis offense. Montel checks in with Sarah Gerston as well on Rudi’s case, General Counsel for The Last Prisoner Project. 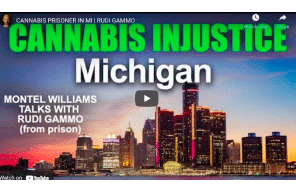