Or in shorthand Maine Senate muck about with decriminalization bill by nitpicking. Apparently it is called the art of politics

The Maine Senate on Wednesday defeated a bill that would have decriminalized possession of all currently illicit drugs.

The setback for reform advocates comes two weeks after the legislation was narrowly approved in the House of Representatives. Despite attempts to compromise, the Senate rejected LD 967 in a 14-18 vote.

As passed by the House, the legislation would have made possession of controlled substances for personal use punishable by a $100 fine, without the threat of incarceration. That fine could also have been waived if a person completed a substance misuse assessment within 45 days of being cited.

On Wednesday, the Senate first adopted an amendment from Sen. Mark Lawrence (D) that would have limited the civil violation to a first and second offense, making the second case punishable by a maximum $200 fine and referral to a substance misuse assessment. A third and subsequent offenses would have remained criminal violations. But that modest compromise did not garner enough support for passage.

“This amendment decriminalizes addiction,” Sen. Craig Hickman (D) said on the floor. “And the people of Maine–and law enforcement officers on the ground in Maine—need us to pass this bill.” 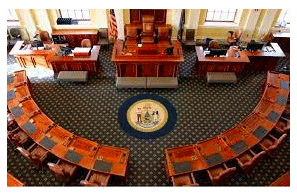