Malawi: Cannabis Regulatory Authority (CRA) says stakeholders in the cannabis industry will be allowed to grow two varieties of medicinal and industrial hemp.

The Malawi Cannabis Regulatory Authority (CRA) says stakeholders in the cannabis industry will be allowed to grow two varieties of medicinal and industrial hemp.

Board Chairperson for CRA, Boniface Kadzamira revealed that Friday in Lilongwe during a Press Conference at Golden Peacock Hotel on the Issuance of Licences and Permits to Cannabis Growing Organizations.

He said these are the only varieties that have been approved to be grown legally by licensed organizations.

“Growing of local hemp [Chamba] remains illegal by the law and anyone found cultivate will face the arm of the law. Even organizations that have been given licences to grow medicinal and industrial are not allowed to do so,” Kadzamira added.

He said organizations that are growing medicinal hemp have paid a 12 month fee of K 7.5 million with a non refundable application deposit of K850,000 and they would be allowed to renew the licences depending on their performance.

The Chairperson pointed out that organizations venturing into cultivation of industrial hemp have paid a 12 month fee of K1.5 million with a K425, 000.00 a non refundable deposit.

Kadzamira said the expectations are that the licensed organizations would start business now since they are already late.

“Stakeholders, they are free to use irrigation or rain fed in order to produce their products. This would largely depend on their capacities,” he stated.

Kadzamira said currently the country has imported adequate seeds for the two varieties and the expatiation was that the country should start producing its own seed varieties of the hemp.

The Chairperson said CRA has received a funding of K100 million from Ministry of Finance for its operational and they are now ready to do mobilization tours to various communities.

CRA Planning Officer, Kondwani Makoko said although there was outcries that the fees were too high to growers but working in a group of 50 to 100 people have proved to be most effective.

He said cannabis cultivation encourages stakeholders to work as cooperatives and groups in order to minimize the challenges they face in conducting their every daily business.

CAR has awarded 35 organizations with 86 licences to start cultivating Cannabis in the country. 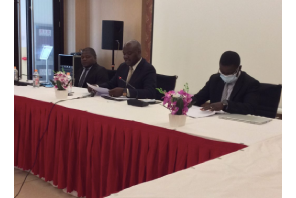