The Staits Times reports…..KUALA LUMPUR: Laws that regulate cannabis and its by-products in Malaysia, including the Dangerous Drugs Act 1952, Poisons Act 1952 and the Sale of Drugs Act 1952, do not prohibit the use of cannabis for medicinal purposes.

Health Minister Khairy Jamaluddin said products containing cannabis for medicinal purposes could be imported and consumed in Malaysia if the product complied with the law.

Khairy said this in a written reply to Syed Saddiq Abdul Rahman(Independent-Muar) who had asked the ministry to state Malaysia’s position on hemp or medical marijuana’s use as an alternative medicine.

Syed Saddiq had previously drawn on its use as an alternative medicine and its recognition by the international medical community.

Later, the former youth and sports minister took to Twitter to say he was really impressed by the health minister’s response to his question, commending the ministry’s data and science-driven decision-making process.

“(This means) medical cannabis is allowed when prerequisite conditions are met. If it can be proven via science, (it) can be registered. (And, the) government will facilitate (this).”

Khairy in his statement, however, asserted that cannabis-containing products should be registered with the Drug Control Authority (DCA) as prescribed by the Control of Drugs and Cosmetics Regulation 1984 under the Sale of Drugs Act.

It also can only be imported by those who have a license and import permit under the Control of Drugs and Cosmetics Regulation, the Poisons Act as well as the Dangerous Drugs Act.

The wholesale trade of the product must also be carried out by dealers who are licensed under the same regulation and acts, whereas the sale or retail supply of the products should only be performed by a registered medical practitioner under the Medical Act 1971.

Registered pharmacists who have a Type A license could also sell or supply cannabis products to certain individuals based on prescriptions issued by registered medical practitioners.

“As such, if there are parties who have sufficient scientific evidence to use cannabis (hemp) for any medicinal purpose by taking into account the aspects of quality, safety and effectiveness, then the application to register cannabis products for medicinal purposes can be submitted to DCA to be evaluated and registered under the Control of Drugs and Cosmetics Regulation 1984 in order to be marketed in Malaysia,” Khairy said in his reply yesterday.

The document was made available on the Parliament website today.

Cannabis is also regulated and listed under Schedule 1 of the Single Convention on Narcotic Drugs of 1961.

The convention is, however, not applicable to the cultivation of the cannabis plant exclusively for industrial or horticultural purposes.

Malaysia’s Dangerous Drugs Act does not make the distinction between “hemp” and “marijuana”, using only the term “cannabis” to refer to “any part of any plant of the genus Cannabis”.

Hemp and marijuana were used interchangeably by the minister and MP, and are different names for the cannabis plant.

“Hemp” is legally defined in the United States as cannabis that contains 0.3 per cent or less THC, one of the cannabinoids or chemicals found in the cannabis plant that produces a “high”.

In the US, “marijuana” legally refers to cannabis that has more than 0.3 per cent THC. 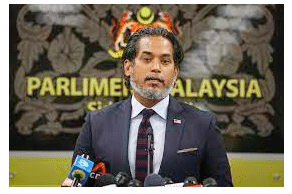