The proposals were issued for public consultation.

“This problem has been with us for ages” Prime Minister Robert Abela said during a press conference.

“It is not acceptable for people who make use of cannabis for personal use to be tried in court”, Abela continued to say.

The major reform which was presented states that an adult who is found with 7 grammes of cannabis for personal use will not be violating any laws according to the new proposals.

In addition, adults who are in possession of more than 7 grammes of cannabis but less than 28 grammes, as long as the cannabis would be exclusively for his or her own personal use, would not be tried in court but will be subjected to a tribunal hearing with a maximum administrative fee of €100.

The reform also addresses minors who are found in possession of cannabis, and proposes that they will not face court proceedings, but will go through a tribunal process.

Through the reform, people will also be given the right to grow cannabis plants only to be used for their own personal consumption. The limit of plants per household is four.

Among other proposals Abela said that people whose conduct is tainted due to the possession of small amounts of cannabis for their personal use, will now have the right to apply to remove those charges from their conduct sheet.

Abela emphasised that although the proposals allow people to possess up to 7 grammes of cannabis, the fight against trafficking and the promotion to reduce drug use is still the top priority of the government.

Cannabis consumption will not be allowed in public areas.

Here’s the PDF of the white paper in English

Document can be sourced at.

Interested parties can also send submissions via this url 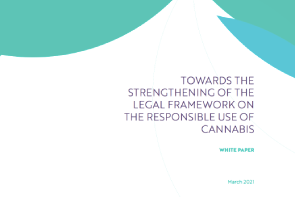