A man was killed and a security guard was injured after a verbal altercation escalated into gunfire at a marijuana dispensary in Eagle Rock on Thursday afternoon, the Los Angeles Police Department said.

The shooting began when two men got into an argument outside Green Earth Collective in the 4800 block of York Boulevard, around 4:40 p.m., LAPD Officer Jeff Lee said.

The guard “came out to see what was going on,” Lee said, and shots were fired. It was not immediately clear who opened fire first.

The security guard and one of the men outside were taken to a hospital with gunshot wounds.

The security guard, a 30-year-old man who has not been identified, remains in critical but stable condition. The other man, who was described only as being in his 20s, later died from his injuries, Lee said.

The third man was detained after the shooting, Lee said, adding that he could not confirm whether he had been arrested. 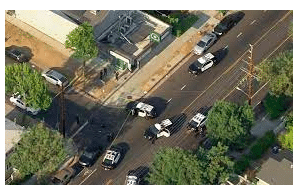