Dead cannabis plants, fertiliser and equipment are among the waste being dumped on Lancashire moorland by suspected Manchester criminals.

The East Rural Taskforce were called to reports of fly-tipping in Briercliffe near to the stunning Thursden Valley.

An examination of the waste for remnants from a cannabis cultivation.

Officers say they believe the bags of rubbish have a ‘possible link to Manchester’.

A picture of the discovery was posted by Lancs Rural Police on social media and appears to show around 20 bags of dumped waste.

Work is now under way to remove the ‘eyesore’ for the rural land with support from Burnley Council.

A Lancs Rural Police spokesperson said: “East Rural Taskforce have been dealing with a report of Fly Tipping in the rural area of Briercliffe near to the stunning Thursden Valley.

“The waste is remnants from a cannabis cultivation with initial examination suggesting a possible link to Manchester.

“The Rural Task Force will be following up enquires but also linking in with Burnley Council to arrange for this eyesore to be removed.” 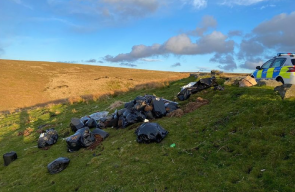