A former Massachusetts mayor first elected at the age of 23 by touting himself as a successful entrepreneur was convicted Friday of stealing money from investors in his start-up to bankroll his lavish lifestyle and soliciting bribes from marijuana vendors who wanted to operate in the struggling mill city.

Jasiel Correia was found guilty of extortion, fraud and filing false tax returns after 23 hours of jury deliberations over four days in a trial that highlighted Correia’s swift rise and fall in Fall River, where he had dazzled voters at a young age with his promises to turn the city around.

Correia, now 29, was also acquitted on three counts, including accusations that he forced his chief of staff to give him half of her salary in order to keep her city job.

Correia, who insisted he was innocent and attacked the charges as politically motivated, never took the stand. After leaving Boston’s federal courthouse fitted with a electronic-monitoring bracelet, Correia told reporters that his “fight is not over” and predicted he would win on appeal.

“Eventually the real truth will come out,” Correia said. “I will be vindicated and my future will be very long and great.”

“Correia made a lot of promises, a lot of bold statements in business, in politics and in government,” Mendell said. “The jury found today, in its verdict, the truth.”

Correia’s lawyer had argued his client wasn’t a criminal, but merely an inexperienced businessman who believed that he was free to use investors’ money as he deemed fit while he was producing the smartphone app.

Before Correia became mayor, prosecutors say he lured investors to support his app called “SnoOwl” by falsely claiming that he had previously sold another business for a big profit. Prosecutors say he used nearly two-thirds of the almost $400,000 he took from investors on himself and spent it on things like fancy hotels, casinos, high-end restaurants and expensive gifts for his girlfriend.

Investors who took the stand told jurors they handed over their cash because they believed Correia was bright, trustworthy and headed for great things. One investor said he thought Correia was a “boy wonder” and that Correia assured him he wasn’t going to “take a dime” out of the company so all the money could go to the development of the app.

Instead, prosecutors say Correia looted a bank account filled with investor money to pay for things like a helicopter tour of Newport, Rhode Island, a Mercedes, a $300 bottle of cologne and a $700 pair of Christian Louboutin shoes for his girlfriend.

“These weren’t occasional purchases, this is shameless continued stealing without any regard for the fact that he is betraying people who trusted him,” Assistant U.S. Attorney Zach Hafer said.

Throughout the trial, prosecutors portrayed Correia as a serial liar, who they said misled voters in order to get elected just like they said he duped investors. 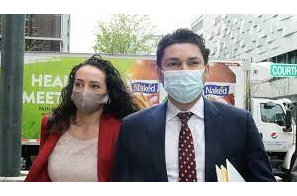