MedMen files suit against the city of Pasadena

A few weeks back we reported …….

Now, as reported by Ganjapreneur, they’ve thrown a bit of a hissyfit.

MedMen has filed suit against the city of Pasadena, California in an effort to block the city’s cannabis business licensing process after the company was removed from consideration following a major ownership/management shift.

MedMen has filed a lawsuit against the city of Pasadena, California asking officials to stop the cannabis business licensing process until the company is reinstated, Pasadena Now reports. MedMed, which applied to do business as MME Pasadena, was removed from the process after a material change in ownership and management was revealed.

In a letter to MedMen, City Manager Steve Mermell said that nine-out-of-10 applicants listed as owners on the company’s applications had changed since the firm was chosen to move forward with the process. The letter points out that former CEO Adam Bierman, former Chief Operating Officer Ben Cook, and former President Andrew Modlin are no longer with the company but are listed on application documents. 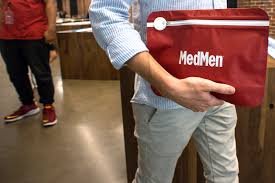