We’d say so looking at this image

A small group of activists were informally and likely unlawfully detained by police on the group’s way to demonstrate for their cannabis rights at the Mexican Supreme Court.

Officers were dispatched by Mexico City’s Secretary of Citizen Security, which is in charge of preserving public order. The police surrounded the protestors and wouldn’t let them leave for several hours.

The encapsulation, as the activists called it, came unexpectedly and none of the approximately 300 cops initially talked to the group nor explained the situation, says Pepe Rivera, leader of Plantón420, which has been demonstrating outside the Senate for months. Pepe Rivera (left) and other Plantón420 activists kneeling and raising their hands while being surrounded by police. Photo via Plantón420

While regulating protests is technically unconstitutional in Mexico, encapsulation or “kettling” — a police tactic that boxes people in and prevents them from exiting — is a non-violent protocol that can be used for city safety if law enforcement can justify the action.

However, the Plantón420 demonstrators weren’t acting unlawfully, and Rivera and some of his peers have special protections that allow them to consume cannabis in public without fear of legal repercussion.

Eventually, the Mexican Commission of Human Rights intervened and spoke to city officials about the situation. The commission helped Plantón420 to arrange meetings with the city and Supreme Court representatives on Tuesday morning.

So despite being held for three to four hours, Rivera tells Mugglehead that he considers the interaction a win, as it opened a direct line of negotiation with city officials.

The incident began at around 7 p.m. and the group was let go around 11:15 p.m. with no arrests made. The group then returned to their usual spot by the Senate.

From what Rivera learned following the event, he says the action was probably the result of Plantón420 being mistaken for another, less organized group of weed protestors that has been causing more public disturbance in the city.

He says that Plantón420 will march to the Supreme Court again on June 28, the day that the cannabis vote is scheduled. 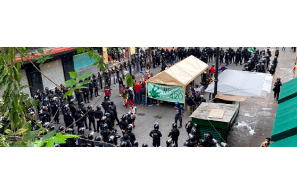