Billings-based Wrong for Montana says the money behind marijuana ballot initiative should be disclosed.

Anti-marijuana activist and Billings auto dealership owner Steve Zabawa filed a complaint Thursday with the Montana Commissioner of Political Practices demanding that a 501(c)(4) nonprofit group called North Fund be required to disclose its donors. North Fund, a nonprofit registered in Washington, D.C., has given nearly $5 million to New Approach Montana, the political committee that organized the upcoming vote to legalize recreational marijuana in the state on the 2020 ballot.

Zabawa’s complaint comes on the heels of Commissioner of Political Practices Jeff Mangan’s own request that North Fund reveal its funders. On Sept. 11, Mangan determined that North Fund is not an “incidental committee” — a category that is not required to disclose its donors — but an “independent committee,” which by state law must be transparent about where its money comes from. Zabawa, who heads a group called Wrong for Montana that opposes the recreational marijuana initiative, makes the same claim in his complaint, calling North Fund “nothing more than a slush fund funneling millions of dollars into Montana and other states attempting to buy ballot issue elections.”

As his own deliberations have been superseded by an official complaint, Mangan could not comment specifically on the issue.

“The question comes down to what’s the primary purpose of this business,” Mangan said of North Fund, “and the complaint just moves it to a whole different level.”

Mangan previously gave North Fund until Sept. 30 to reveal its donors or appeal his decision. On Sept. 30, the group requested an appeal without disclosing its funders. In a letter prepared by two attorneys, North Fund claims it should not be reclassified as an independent committee, on the basis that, according to Montana’s 2015 anti-dark money Disclose Act, it has only incidentally supported marijuana legalization in Montana, with the majority of the group’s spending being done on other issues in other states.

North Fund’s appeal references a similar COPP complaint that Zabawa filed in 2016 against the Montana Cannabis Industry Association. That complaint claimed that MTCIA purposely obscured its funding sources in violation of state campaign finance law. Then-Commissioner of Political Practices Jonathan Motl ruled against Zabawa, determining that MTCIA was in fact an incidental committee and not required to disclose its donors.

One of the two lawyers who wrote North Fund’s Sept. 30 reply to Mangan works for large national litigation firm Nossaman LLP. The other attorney is Jim Molloy, a former senior policy adviser to Montana Gov. Steve Bullock and a co-author of Montana’s 2015 Disclose Act, which regulates disclosure of the sources of money spent on state political campaigns. Molloy also represented New Approach Montana in an unsuccessful lawsuit against the state earlier this year that sought to allow the group to gather ballot-qualifying signatures electronically in light of signature-gathering restrictions caused by the COVID-19 pandemic. New Approach Montana Political Director Pepper Petersen said at the time that Molloy was hired to help draft the group’s ballot initiatives due to his expertise in Montana constitutional law. 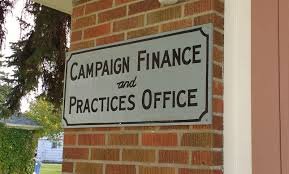