A 24-year-old man was in serious condition in hospital after a clerk and a Montreal police officer were assaulted at the Queen Mary Rd. outlet of the Société Québécoise du cannabis. Reports The Montreal Gazette.

Quebec’s independent investigations bureau (BEI), which is assigned to examine any police operation involving a death or injury, said the man exhibited signs of intoxication when he entered the store at about 5:40 p.m. Monday. The store clerk was violently assaulted and lost consciousness.

When police officers arrived at the scene, they, too, came under attack. Officers tried to subdue the man with pepper spray but were unsuccessful.

According to the BEI, the man then focused his attack on one of the officers, knocking him out. Police reinforcements arrived, and at least one night stick was used in an effort to bring the man under control — again without success.

In the ensuing struggle the man suffered a head wound before being handcuffed and taken to hospital.

By early Tuesday the BEI had issued no update on the condition of the man, the store clerk or the police officer.

The BEI has assigned eight investigators to the case and is receiving technical assistance from the Sûreté du Québec. 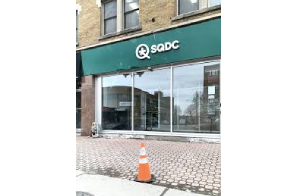