More Industries Suffer From Cannabis Demonization Than You Think

If you wish to re-publish this story please do so with following accreditation
AUTHOR:    Patrick Woods of GanjaPrint
PUBLISHER:  CANNABIS LAW REPORT

Adjacent industries are crippled by legislation, first and foremost. We all know that big corporations need to play ball if they want to stay afloat. Offshore accounts are not included under “play fair”, but still, within the countries they operate – they must go by the book.

Cannabis is still far from being legalized across the US, and even if it were, cannabis culture is mostly confined to a relatively small percentage of the population, while anti-cannabis groups are still quite large and active.

So even with cannabis becoming legal across the world, corporations would think twice before risking their financial footing by allowing, say, cannabis advertisements on their platforms.

We are, of course, talking about the most well known names of online advertising: Google, Bing, and Facebook.

Google Ads (formerly AdWords) makes up more than 95% of Google’s income stream. Looking at it from Google’s perspective, they’re more of an advertising platform than a search engine. It’s understandable why they want to keep it clean and without controversies. Their Ad Policy states clearly:

We want to help keep people safe both online and offline, so we don’t allow the promotion of some products or services that cause damage, harm, or injury.

These products include: explosives, firearms (not even airsof and paintball guns are allowed), other weapons, recreational drugs, tobacco in any shape or form.

But their tendency to side with caution isn’t limited to just their advertising platform.

Legitimate businesses in places where cannabis is legal can open a Google MyBusiness (GMB) account, verify that they’re legitimate, complete with a Google Maps location. One thing they’re not allowed to do, however, is use GMB posts to promote their business.

GMB posts are used to publish your events, products, and services directly to Google Search and Maps. They expire after 1 week (except event posts which expire after the event date).

If you are classified as a business related to “risky products”, you can’t use this feature for posting anything. Even if you want to announce a sale of new T-shirts, which is completely within reason as a branding and merchandizing strategy and has nothing to do with illicit products.

As for Facebook, the world’s biggest social media platform, they’ve been preventing cannabis pages from showing on search results, but they have made a slight change last year. They will now show those businesses if they’ve been verified as genuine through Facebook’s systems.

Ads on Facebook are still forbidden for the cannabis industry. Not even rolling papers are allowed to show up in the ad image.

Playing To The Tune Of Legislators

It’s worth noting that it’s primarily the states that regulate the advertising of illicit or controlled substances, so the corporations have no choice but to obey.

The awkward part is that Google, Bing and Facebook have global policies, so they are not making exceptions. Not in states where cannabis is legal, nor in countries like Netherlands, which have really loose drug laws and allow for this activity.

Meanwhile, back in 2017, payment processors began purging all marijuana-related businesses after the White House sent out concerns that the marijuana industry was “violent”. Trump then suggested federal-level control over recreational marijuana.

Even businesses that don’t sell weed accessories that are specific to marijuana, such as some online custom accessories stores, suffered from being dropped by their payment processors. Not even selling paper bags is allowed, it would seem.

Not everything is as bleak as it sounds. Big corporations are definitely eyeing the giant that is cannabis, and no one can ignore the scientific studies that have been emerging.

The legislation needs to catch up, and that’s already under way, as the 2018 Farm Bill has been a success for hemp growers. Under the new bill, hemp is no longer shoved in the same bucket as the controlled substances derived from cannabis, to the delight of many farmers.

This suggests we should also start to change our perspective on marijuana and try to get as much benefit from it as possible. It has much to offer, but it’s up to us to choose whether to take it or not.

At least we can try not to punish businesses that are targeting the stoner culture audience with harmless and non-illicit products like lighters and t-shirts.

The general concensus at the moment is that if you’re starting a new merchandising business, such as an online retail, make sure you do your homework.

If your cannabis-related merchandise makes up only a fraction of your total business, it’s better ditch it altogether then to suffer getting cut off by your payment processor. 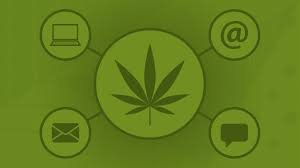