About 1,000 marijuana plants, more than 160 roosters and several guns were seized in rural Calaveras County during a recent raid, law enforcement said on Friday.

The Calaveras County Sheriff’s Office Marijuana Enforcement Unit says it seized $65,000 of marijuana plants on the property in Burson including an RV trailer full of seedlings during the April 20 operation.

Authorities also seized a total of seven guns, one of which was reported stolen out of Stockton according to the sheriff’s office.

Along with the plants and weapons, deputies also found at least 160 “blood sport” roosters.

Calaveras County Sheriff’s Office said some of the roosters were collected as evidence while some were left on the property with deputies and animal services expected to check in on the animals.

The sheriff’s office says it issued a citation to a 71-year-old man on drug allegations and a 45-year-old woman on animal cruelty allegations. 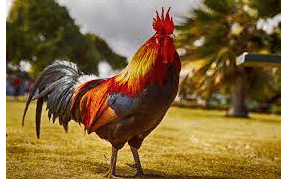