Operation Clean Sweep resulted in the removal of 42,638 cannabis plants and numerous environmental violations and acts throughout Mendocino County, the Sheriff’s Office announced this week.

During the week of July 15 through 19, the Mendocino County Sheriff’s Office worked with the California Department of Food and Agriculture (CalCannabis Licensing), California Department of Fish and Wildlife, California State Water Resources Board, Cal Fire, and the California Army National Guard to serve search warrants on public/private lands to investigate identified illegal cannabis cultivation sites. The sites were picked based on their suspected involvement in water diversion or environmental degradation.

The sheriff’s office said they also found water pollution from trash, pesticides and generator fuel, illegal grading of land to include the unnatural damming of watersheds (streams/rivers/springs), and Foothill Yellow-Legged frogs in a stream that was affected by an act of Illegal damming and water diversion. In June 2017, the California Fish and Game Commission voted to make the Foothill Yellow-Legged Frog a candidate species under the California Endangered Species Act. The sheriff’s office has not yet made any arrests in connection with Operation Clean Sweep.

Prior to the search warrants, the sheriff’s office focused on pre-identified sites that did not have cannabis permits, state water permits for cannabis, or permits from Cal Fire for deforestation and legal tree removal. 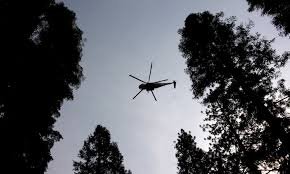