Where do you start with a story like this !

Called Cannabis Energy Drink, the beverage does not contain cannabis or any other intoxicants, despite its catchy name. Even so, Global Voices reports the authorities have issued a statement demanding the drink be pulled from the market, with officials alleging it could encourage citizens to partake in pot, which is prohibited in the country.

The drink’s official website specifies the beverage “contains no THC or any other psychoactive compounds,” although it recommends that pregnant women, diabetics, children and those sensitive to caffeine do not consume Cannabis Energy Drink, which comes in “Hemp” and “Hemp Light” flavours.

The can, which is produced in Austria, is bright green and shows two cannabis leaves in white and darker green. It is that depiction that runs afoul of Mozambique’s somewhat Quebec-style prohibition on promoting cannabis.

Although the drink has been sold in Mozambique since 2012, per social media promoting the product, it seems to have only recently appeared on the country’s regulatory radar. Trade regulators informed commercial agents and their employees that the drink would be banned from sale and import in Mozambique starting in July, according to Global Voices.

Residents took to Twitter to express their dismay at the drink’s banning, with Human Rights Watch researcher Zenaida Machada lamenting that “following this logic,” perhaps the country could consider banning the country’s flag “as the AK-47 [featured on the flag] could incite people to kill.”

Despite strict anti-drug regulations in place, the use of cannabis by residents of Mozambique may be more likely to be influenced by sweeping drug reform across Africa’s Southern Region. Over the past few years, neighbouring countries such as Zimbabwe, Zambia and South Africa reportedly have all legalized cannabis for medical and research purposes, with the latter also legalizing adult use cannabis consumed in private locations. 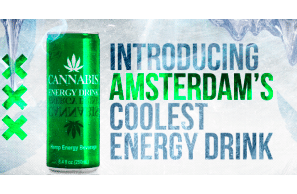