The mining industry is getting a better deal than the cannabis industry..“I think the contrast between how this state treats mining and cannabis reveals the outsize influence and crony capitalism of the mining industry,” says Patrick Donnelly, Nevada State Director for the Center for Biological Diversity

The Nevada Current has this interesting report.

By contrast, the state’s fledgling marijuana industry generated just $529.8 million in revenue but contributed $69.8 million to state and local coffers that same year — the first of legal recreational sales.

By the next year, fiscal 2019, marijuana taxes amounted to just under $110 million, according to the state, on sales of $639 million.

Marijuana tax revenue for the first three months of fiscal year 2020 is $29.9 million.

At that pace, cannabis is in line to contribute as much if not more in state tax revenue than the mining industry.

The Silver State’s mining industry produced 72 percent of U.S. gold in 2017 and 5.6 percent of the gold produced worldwide, according to the Elko Daily Free Press.   But the precious metal fails to pull its weight when it comes to generating tax revenue.

“I think the contrast between how this state treats mining and cannabis reveals the outsize influence and crony capitalism of the mining industry,” says Patrick Donnelly, Nevada State Director for the Center for Biological Diversity. “While cannabis, an industry mostly domestic to our state, is taxed to the gills, mining, almost all profits of which end up out of state, enjoys a highly privileged tax status which doesn’t come close to compensating residents of Nevada for the environmental costs. Mining exacts a huge toll on our environment as compared to cannabis. And while Nevada cannabis consumers are on the hook for very high taxes, the fact that mining gets away with paying negligible taxes illustrates the unfair, preferential treatment our most environmentally destructive industry gets.”

While Nevada’s marijuana licensing scheme was designed to favor business interests with a history of local investment, licenses are being gobbled up by foreign and multi-national corporations, according to ownership records from the state.

According to a report released this year, global sales in regulated markets increased by 20 percent in 2018 and are projected to jump 36 percent to $14.9 billion in 2019 and shatter the $40 billion mark by 2024.

During the last decade, Nevada’s mining industry has paid an average of $152 million a year in taxes. That average has fallen to $124.4 million in the last five years.

But even during the boom years, Nevada’s mining industry paid a paltry share of its earnings in taxes.

A formula written into the Nevada constitution at the dawn of statehood allows mining companies to deduct the costs of extraction and other expenses from the price of sales.  The difference – the net proceeds – is taxed, but capped at five percent.

About half of the taxes derived from mining are returned to the counties where the extraction occurred.  The other half goes to the state’s general fund.

Marijuana taxes go to the state’s emergency savings, to schools and to local governments to offset the cost of regulating the industry.

A 15 percent wholesale tax paid by marijuana cultivators totaled $44 million in fiscal year 2019.  About $5 million of that went to local governments. The remainder of went to the state’s Distributive School Account, which funds education.

A 2014 ballot measure to remove mining’s tax protections from the state constitution barely failed to win approval from voters by less than one percentage point.

Efforts at the federal level to impose mineral royalties on mining, which are exempted under an 1872 law designed to spur gold mining, have also failed over the decades.

A bill currently before Congress would impose royalty fees between 8 and 12.5 percent on mining proceeds, with 25 percent of the money generated returned to the state.

Presidential hopefuls have been hesitant to weigh in on the measure.

Mining reform played a role in Nevada’s presidential caucuses in 2007, when a proposal that mining companies pay a 4 percent gross royalty on production on existing mines, and 8 percent on new mining operations passed the House.

“What’s clear to me is that the legislation that’s been proposed places a significant burden on the mining industry and could have a significant impact on jobs, given the difficulty the industry is already having in maintaining its operations,” then-candidate Barack Obama told Nevada reporters.

The measure died in the Senate with the help of then-Majority Leader Harry Reid.

Nevada’s current congressional delegates have likewise been reluctant to take on the mining industry.  None have signed on to bills before Congress. 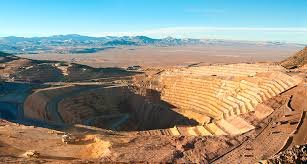