The Reno Gazette Jnl reports..Laura Simes started getting nervous in July when her new agent card, which allows her to legally work in the cannabis industry, hadn’t arrived in the mail. It’d been a month since her old card expired.

She’d sent in the fees and all the needed information to the Cannabis Compliance Board, a relatively new state regulatory agency that oversees the recreational marijuana industry. Now it’s November and she still doesn’t have her card.

“I think my boss is having the same issue, and he has other friends in the industry that are having the same problem,” said Simes, who works in a cultivation facility in the Las Vegas area.

She did recently receive an email from the agency saying she could work without penalty due to the sometimes months-long delay in processing agent cards. She keeps a printout of the email, complete with a PDF temporary card, in her locker at work, just in case.

“I don’t think they know exactly what they’re doing,” said Simes of the Cannabis Compliance Board, which took the reins over from the Department of Taxation in July.

In Nevada’s marijuana industry, Simes is one of hundreds — possibly thousands, according to the Nevada Current — of employees who are working with out-of-date agent cards. Agent cards, which require a background check and fingerprints, grant workers access to different areas in marijuana business facilities. The state requires them to track employees and ensure legal practices in an industry that is still somewhat controversial and, at the least, heavily scrutinized.

Businesses are worried that, despite recent state moves to alleviate the backlog, they’re still going to be penalized. And employees are worried for their jobs in a tumultuous economy.

State officials are trying to conquer the backlog. Most recently, for example, the board extended the expiration dates for permanent agent cards by 90 days and temporary agent cards through Jan. 31.

“I think it’s helpful for all the people who have been in limbo, for all the people that have lost their faith so to speak,” said Derek Gumin, director of wholesale at Planet 13 in Las Vegas. “But it still just leaves us in the same place for a few months.” 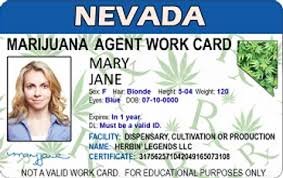