Why this is still happening in this day and age is beyond us….

A 19-year-old man was shot in the chest during a marijuana deal turned deadly, according to new information from the Clark County coroner’s office.

Bobby Driver was pronounced dead at University Medical Center after a shooting in Las Vegas early Wednesday morning, according to the coroner’s office. The cause of death was ruled a gunshot wound to the chest, and the manner was homicide.

Officers were called at 3:30 a.m. to the 2000 block of North Nellis Boulevard, near Lake Mead Boulevard, after police say Driver brought an AR-style rifle to a marijuana transaction, Metropolitan Police Department Lt. Ray Spencer said at the time.

Driver shot one of the men in the head and another man fired at Driver, killing him.

The man who was shot in the head was in critical condition Wednesday morning, but his status was unknown Thursday night. A third man involved in the shooting walked into the hospital later that morning with an injury that was not life-threatening, Spencer said. 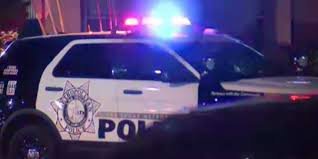