Breaking AC reports…
Businesses giving away free cannabis with the purchase of other items say threats from the state attorney general won’t stop them.
The governor signed legislation in February legalizing adult-use marijuana. But there is still nowhere for people to buy it as the state waits for the Cannabis Regulatory Committee to set the rules for licensing sales.
That’s where businesses like Sky High Munchies, West Wind Wellness, Slumped Kitchen and NJGreenDirect.com have stepped in.
They sell items like snacks, T-shirts or jars and then offer the option of free cannabis to customers who are 21 or older.

“I think it’s a scare tactic to be 100 percent honest with you,” said Gary Bozzini, whose Atlantic County-based Sky High Munchies was targeted.

Bozzini along with five others sat down with BreakingAC to address the allegations, and tell their side of the story.

“Nobody’s being deceived,” said Daniel Kessel, whose Bud Hub was among the first to have delivery drivers who can offer customers free weed.

The attorney general didn’t name the Ocean County-based business but Kessel has been a vocal proponent in the fight, Bozzini said.

It’s the state that committed fraud, Kessel said, by making marijuana legal, then dragging its feet in licensing anyone to sell it.

“We’re not trying to cheat the system,” Bozzini said. “We’re all trying to do it by the book.”
The problem is, the book has not yet been written.

“They left a void… and entrepreneurs and people who are business savvy and want to do right by the community are filling the void, and they don’t like that,” Sky High’s Andrew Nestoras said of the state.
While it may be taking advantage of a loophole that allows the “gifting” of marijuana, their customers know exactly what they’re getting, the business representatives said.

And, if people are paying $165 for a few snacks from Sky High or $350 for a West Winds jar, that’s their choice as consumers, the owners say.

Bozzini noted that on a recent trip to an Atlantic City store he spent $89 for five bags of chips, five Twix bars and four sodas, “and I didn’t get a free bag of weed,” he joked.

Wording that some of the companies have reworked in light of the state’s letter, which those targeted say they still have not received.

After reading it online, Bozzini said his customers now can opt out of a free gift, and get only their munchies.

“If we’re deceiving people, why would they keep coming back?” Kessel asked.

“A lot of people find solace in what we do,” Sky High’s Joey C. said.

His customer base is mostly senior citizens and cancer patients.

He recalled one elderly woman who came to the door with her walker. He asked to speak with her daughter, only to find the delivery was for her.

One of West Wind Wellness’ owners is a medical professional.

Because of that, “Dana P.” is proud of her work, but also has to protect her identity.

“How many people have we talked to, medical patients from dispensaries, that would rather work with us?” her partner, Patrick Phalen, asked.

They either can’t get the product they need, or are forced to wait hours and still don’t get what they’re promised, he explained.

“What we’re doing isn’t illegal, and that’s the bo

But the group doesn’t believe that will stop the state from continuing to try to find something to charge them with.

“They may lock some of us up because they have the power to do that,” Bozzini said.

“I think it’s going to take a lawsuit,” Kessel said.

“We all have legal representation because we take this seriously,” said Dana. “We all really have the same goal. We’re here to serve the community.” 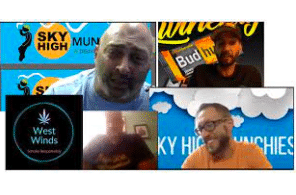