A New Jersey appeals court ruled Tuesday that Pepsi Bottling Co. must reimburse a former employee for medical cannabis costs related to his work-related back injury.

The ruling came after a recent New Jersey Supreme Court decision that employers in the state can be compelled to cover medical cannabis expenses despite federal prohibition of the drug under the Controlled Substances Act.

Based on the Supreme Court’s opinion in Vincent Hager v. M&K Construction on April 13, the appellate court panel upheld a workers’ compensation order in December 2019 directing Pepsi Co. to reimburse Brian Calmon for the medical cannabis prescribed for an injury that he sustained on the job.

New Jersey cannabis lawyer Dan McKillop, partner at Scarinci Hollenbeck, said all employers in the Garden State should take note of the court’s decision in a LinkedIn post.

Pepsi Co. filed the appeal on April 14, a day after the Supreme Court’s decision, using the same argument that M&K had put forward in December 2020.

M&K had contended that since New Jersey’s Compassionate Use Medical Cannabis Act runs afoul with the order of the federal Controlled Substances Act, the firm would be subject to potential federal criminal liability for aiding-and-abetting the use of an illegal drug.

Additionally, M&K asserted that the case fit within an exception to New Jersey’s medical cannabis law’s reimbursement requirement, and therefore Hager had to cover his own costs.

But the Supreme Court unanimously ruled that injured worker Hager presented sufficient evidence that his prescribed medical cannabis treatment was a “reasonable and necessary” treatment under the state’s Workers Compensation Act, as well as the state’s Compassionate Use Act, and thus can compel his employer to reimburse the cost of the drug.

The Supreme Court also concluded that it’s possible for M&K to abide by both the Controlled Substance Act and New Jersey’s Compassionate Use Medical Cannabis Act at the same time.

In the Calmon v. Pepsi case, the New Jersey appellate court panel held up that precedent in their ruling that Pepsi had to cover Calmon’s previous medical cannabis costs.

“Having considered the record and the parties’ arguments, we affirm the December 2, 2019 order issued by Supervising Judge of Workers’ Compensation Eugene Mulvaney based on the Court’s controlling opinion,” the ruling reads. 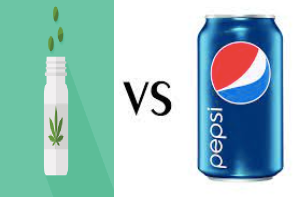