The explosion occurred while two workers were using equipment to extract THC from the cannabis plant.

The incident is now the center of a criminal investigation in which New MexiCann owner Carlos Gonzales, 56, of Santa Fe, was charged with two counts of negligent arson. His case is still making its way through Santa Fe Magistrate Court.

Gonzales’ attorney, John Day, declined to say much because he did not want to try the case in the media. But Day did say that New MexiCann had its licensing hearing in March to determine whether its license will be permanently revoked. The hearing officer has, however, yet to render a decision.

Gonzales is accused of altering the hot plate system used to extract THC from the cannabis plant at the facility. The Department of Health allows only closed-loop extractions and Gonzales allegedly switched the hot plates to an open-loop system.

That exposed the ethanol used in the extraction process, which is how the October explosion occurred.

But inspectors say they found other problems unrelated to the explosion.

DOH reports show that inspectors noticed a marijuana plant growing outside in New MexiCann’s parking lot. The plant didn’t have a bio-tracking number, and was accessible to people outside of the building.

Gonzales said he didn’t know about the plant in the parking lot, while acknowledging that he would regularly walk the facility, the report said. In addition to the parking lot plant, there were 20 unlicensed plants without bio-tracking numbers in the dispensary’s greenhouse. 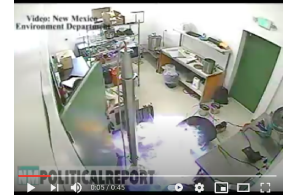