Following multiple failed attempts, the New York legislature has finally reached an agreement to legalize cannabis for adult-use. Following a three-way agreement between the New York Assembly, Senate, and the governor’s office, the new law will permit the cultivation, distribution and sale of cannabis in New York subject to state regulations.

The legislation provides licensing for cannabis producers, distributors, retailers, and other actors in the cannabis market, and creates a social and economic equity program to assist individuals disproportionately impacted by cannabis enforcement who want to participate in the industry.

The legislation creates licenses for producers and distributors, among other entities, and the legislation will implement strict quality control, public health and consumer protections. A wide variety of licenses will be available through the law, such as licenses for cultivators, processors, distributors, dispensaries, cooperatives, delivery services, and on-site consumption businesses.

Additionally, a social and economic equity program will facilitate individuals disproportionally impacted by cannabis enforcement, including creating a goal of 50% of licenses to go to a minority or woman owned business enterprise, or distressed farmers or service-disabled veterans to encourage participation in the industry.

Under the new legislation, 40 percent of tax revenue from cannabis will be directed to minority communities with a history of disproportionate cannabis arrests.

The bill also allows the delivery of cannabis to consumers and will permit club-like lounges or “consumption sites” where cannabis (but not alcohol) can be consumed. The law further proposes that at-home cultivation be permitted, which will allow a person to cultivate up to six plants at home (indoors or outdoors) for personal use. Additionally, the bill will allow municipalities to “opt-out” of hosting cannabis dispensaries.

Other attempts at legalizing cannabis in New York failed in prior sessions, despite the promise of increased tax revenue. Neighboring states such as Vermont, Massachusetts, and New Jersey have recently enacted their own programs. Sweeping changes in these close-by jurisdictions have arguably put pressure on New York to follow suit as the state was in serious need of new tax revenue following the pandemic.

Of course, the first legal sales of adult-use cannabis are likely more than a year away. Officials must first draft and adopt the rules to govern the program, including the regulation of wholesalers and dispensaries, cultivation and retail licenses, as well as the creation of new taxes and a five-member control board that will oversee the industry. However, businesses seeking to obtain licensure under the new program can (and should) begin to make preparations now to increase the likelihood of a successful application and operation under the program.

Notably, the bill comes with a heavy emphasis on racial justice and seeks to put an end to years of racially disproportionate policing resulting in Black and Hispanic New Yorkers arrested at far higher rates than whites.

Reports indicate that there are 40 medical cannabis dispensaries currently operating in New York, which serve approximately 500,000 residents within a 1,400-square-mile radius per location. Many contend that thousands of New Yorkers are underserved under the current law, and, in some cases, they are forced to travel as long as three hours to obtain medical cannabis.

According to a study conducted by the New York Medical Cannabis Industry Association which is cited by the New York Times, the cannabis market in New York is currently estimated to be $4.6 billion and is expected to grow to $5.8 billion by 2027. According to the study cited, the state could capture and tax $1.2 billion of that market by 2023 and $4.2 billion by 2027, depending on the rules and regulations.

If you are interested in discussing the existing and imminent business opportunities in New York, please contact us today for a consultation. Our attorneys are here to help! 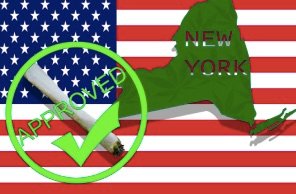