The resounding win for this Green candidate who is a strong proponent of cannabis legalization / regulation bodes well for the referendum says News Hub New Zealand.

In an op-ed piece they write…

An unprecedented victory for Green Party MP Chlöe Swarbrick in the Auckland Central electorate last night may spell a dramatic swing in the forthcoming cannabis referendum results, according to a panel of political commentators.

New Zealanders have had their say on whether recreational cannabis should be legalised, the results of which are yet to be released. On their ballots, Kiwis were asked whether they supported the Cannabis Legalisation and Control Bill – legislation that would legalise the use of recreational marijuana by implementing a regulatory framework to control the sale and supply of the drug, which is readily available through the black market and used prolifically nationwide.

Swarbrick, the Green Party’s drug reform spokesperson, is one of Parliament’s most prominent proponents of cannabis legalisation, and has actively advocated for the ‘vote yes’ campaign throughout her electioneering.

The young MP has consistently urged Kiwis not to conflate voting ‘yes’ for the Cannabis Legalisation and Control Bill with supporting cannabis use. Instead, she argues, voting in favour of the Bill supports the implementation of restrictions and a regulatory framework to ensure greater safety for communities and rangatahi – rather than continuing the current black market free-for-all.

Despite recent polling indicating the public consensus is no, recreational cannabis should not be legalised in New Zealand, Swarbrick’s shock victory has sparked theories that another major upset should not be ruled out.

Presenting Newshub Nation’s Election Special on Sunday morning, political editor Tova O’Brien floated the possibility that Swarbrick’s surprise win – scraping past Labour’s Helen White by a mere 492 votes – could be indicative of another unexpected turnout in favour of the referendum.

Dr Lara Greaves, an Auckland University lecturer in New Zealand politics and public policy, said it is a possibility.

Dr Greaves praised Swarbrick as an “excellent politician” who has played an important role in the legalisation campaign.

“I think more broadly though, the way we talk about Chlöe Swarbrick and politics and [her] being an up-and-comer, the function of her age and her gender – she is actually an excellent politician, she worked the cannabis referendum really well, obviously for principled reasons,” Dr Greaves said. 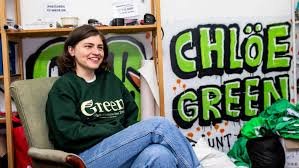