The margin is thinner than a cannabis leaf, but voters have said nope to legalising dope.

That’s about the population of Napier. Still, high profile yes campaigner former Prime Minister Helen Clark believes there is still a mandate for significant drug law reform that could see people legally able to grow small quantities for their own use. 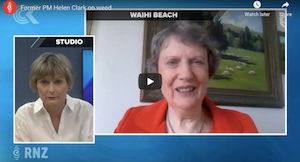