My Central Jersey reports on the settlement..

For six months, Cheech’s Own, a Somerville coffee company and cafe, was embroiled in a legal dispute with Richard “Cheech” Marin and his company, Koo Koo Banana, over allegations of trademark infringement.

Marin, half of the legendary comedy team Cheech and Chong and co-star of movies such as “Up In Smoke,” “Cheech and Chong’s Next Movie” and “Nice Dreams,” alleged that Cheech’s Own’s use of his name was a “knowing, malicious, oppressive, fraudulent act, calculated to harm (Marin’s) brand and existing trademark” and a “naked attempt to profit off Cheech’s name.”

Now, however, Cheech’s Own founder Steven Chiocchi, who has gone by the nickname “Cheech” for almost a decade, finally can sip his coffee in peace.

Following an out-of-court settlement in March, the four-year-old company, which opened a brick-and-mortar shop two years ago, officially rebranded as Lucid Coffee Co. on Oct. 26 and held a ribbon cutting on Oct. 30. 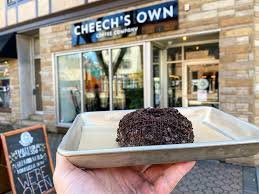