We’ve written up a few pieces about Ocean City – they really don’t like cannabis and smoking in general!

Now, another type of smoking will be banned in the same areas: Smoking or vaping marijuana or hashish will not be allowed in public under a proposed new law.

Voting 7-0, City Council introduced an ordinance Thursday night that will effectively make all public places in the resort town a no-smoking zone for marijuana, including the Boardwalk, beaches, playgrounds and other popular areas.

The ordinance will also ban marijuana smoking or vaping at other places that fall within the public realm, City Solicitor Dorothy McCrosson said. They will include highways, waterways, outdoor events and outdoor dining areas.

In stark language, the ordinance warns of the “inherently dangerous behavior” of smoking. It also cites the need to protect children from exposure to marijuana, cannabis or hashish.

Council has scheduled a public hearing and final vote on the ordinance for its May 27 meeting.

Just last month, Council gave final approval to another ordinance that bans the sale, distribution or manufacturing of marijuana in the entire city. 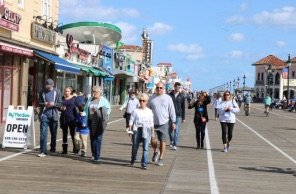