How the world turns !

Now the NZ populace have said no to regulated cannabis in last year’s  referendum the nation’s police have also said no to constant funding looking for illegal grows that is reported to have ….blind sided frontline staff and the police minister.

Police have quietly shelved their annual cannabis eradication operation in a major change that has blind sided frontline staff and the police minister.

For more than 20 years, officers have taken to the skies with the New Zealand Defence Force as part of a national operation to find back country cannabis plots.

However, Stuff can reveal top brass at Police National Headquarters, which provides more than $700,000 a year to fund hundreds of hours of flight time for helicopters and planes used in the operation, have decided to scrap it.

One of the reasons the operation has been grounded is a lack of appetite from the leaders of the 12 police districts. 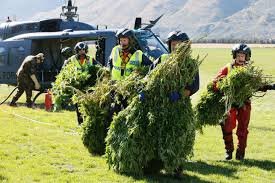