PORTLAND, OR. – On September 21, 2020, the Oregon Liquor Control Commission (OLCC) issued an Order of Immediate License Suspension to the recreational marijuana lab licensee of Ecotest Labs in Phoenix, OR.

Ecotest Labs must not exercise any license privileges, or engage in any delivery or receipt of marijuana items, at the licensed premises, or any other premises until further order by the OLCC. The immediate suspension was based on a series of violations which the OLCC used to determine that Ecotest’s continued operation represents a serious danger to the public health and safety. The licensee for Ecotest Labs is Proper Rental Management, LLC. 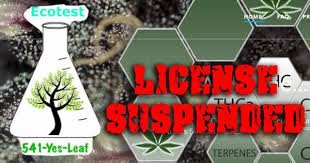