He doesn’t seem to be able to stay out of trouble. At his age too!

The OR Mail Tribune reports

Federal prosecutors are seeking to seize his 1956 Piper airplane and more than $75,000 allegedly linked to the crimes. 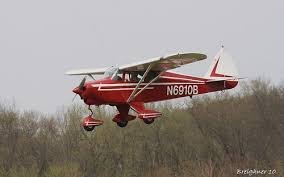 A federal grand jury indicted John Tobe Larson, 70, earlier this month of using interstate commerce facilities to commit murder-for-hire, as well as possessing a controlled substance with intent to distribute the drug, according to documents filed Oct. 15 by the U.S. Attorney’s Office in U.S. District Court in Medford. The court document described the drug involved as “over one kilogram of marijuana in the form of hashish oil.”

Larson has been held in the Jackson County Jail since August 2019 on the murder-for-hire charge stemming from a sting operation by the Bureau of Alcohol, Tobacco, Firearms and Explosives that involved a special agent posing as a hitman from California, according to court documents filed in the case.

The investigation began in May 2019 following tips that Larson was distributing marijuana from Southern Oregon to other parts of the United States using his private plane, and smuggling “bulk cash” back into Southern Oregon, according to court documents.

A confidential informant cooperating with Oregon State Police and the Drug Enforcement Administration alerted the state and federal authorities that Larson was seeking a “collections guy” because he had an associate who owed Larson about $75,000 and wanted him to “disappear” and “would prefer that the body is never f—ing found,” according to an affidavit filed in July 2019.

During a meeting at a Grants Pass hotel in June 2019 that was secretly recorded, Larson allegedly told an undercover ATF special agent that he wanted the man dead for reasons that included unpaid jobs and concerns that his target was a “rat.”

Larson allegedly arranged to pay the undercover agent $20,000 for the murder, including a $10,000 “down payment,” and another $10,000 for a picture of the body being dumped into the ocean. He allegedly made a drug delivery from Southern Oregon to St. Louis, Missouri, to cover the “down payment,” and gave the payment to the undercover agent at a Grants Pass hotel room June 27, along with a prepaid “burner” cellphone.

Larson allegedly instructed the undercover agent to call him “Maverick” on the prepaid phone.

Larson was arrested Aug. 21 in Rogue River after he allegedly gave the undercover agent $5,000 and approximately one liter of concentrated marijuana distillate after being led to believe that his target had been murdered, according to earlier news reports. He’s been held in the Jackson County Jail ever since.

In March, Larson sought to be released from the jail for fear of contracting COVID-19, but Assistant U.S. Attorney Marco Boccato argued Larson posed “an extreme risk of flight and is an obvious danger.” Boccato claimed that Larson allegedly bragged to the hitman about owning mansions in Russia and Europe.

Boccato argued that Larson is “known to hide assets by burying the assets or placing those assets in other individuals’ names.” As an example, the plane was registered in Larson’s son’s name.

“There is no way to determine what resources defendant (Larson) has at his disposal to flee or commit similar crimes,” Boccato argued.

Larson’s next court appearance in the case is scheduled for Nov. 23.

Larson’s criminal history includes a 2009 federal conviction in Alaska for operating a large marijuana grow, according to the U.S. Attorney’s office. 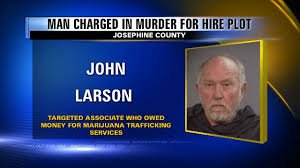