Here’s the press release sent out about the new bill

Repairing the harm from decades of inequity from the War on Drugs is the goal of the Cannabis Social Equity Act introduced this week by a coalition of legislators in the Oregon State Legislature. HB 3112 is the culmination of months of work led by former State Rep. Akasha Lawrence Spencer including numerous cannabis companies, the NuLeaf Project, the Oregon Cannabis Association, the Oregon Retailers of Cannabis Association, the City of Portland, Urban League, and law students from Willamette University.

“We came together with a common purpose – to undo and repair some of the harm caused by cannabis criminalization on Black, Indignenious and Latinx communities in Oregon,” said Rep. Lawrence Spence. “This legislation uses cannabis tax revenue to invest in Oregonians who have been unjustly targeted for decades by law enforcement, in an effort to repair some of the generational harm done to their communities.”

Jeanette Ward Horton, executive director of NuLeaf Project, has been working with the coalition since its inception eight months ago. NuLeaf Project receives funding from City of Portland cannabis tax revenues and private donations to aid cannabis start up companies with funds, technical assistance and job placement/training.

“We’ve seen the harm to far too many families to not address this issue. Cannabis convictions bring challenges that ripple through families and cause hardship for the children of children whose parents were disproportionately arrested. The loss of jobs, education grants, housing and more that can all stem from a minor cannabis conviction have impacted communities of color for generations. Today Oregon has the chance to undo some of that harm,” said Ward-Horton.

Chief Sponsor and State Rep. Ricki Ruiz said fixing the expungement process is a critical piece of the legislation.

“Less than 200 out of 28,000 Oregonians eligible for expungement were able to successfully complete the process in the past two years. We need to do better,” said Ruiz. “This bill provides us the path and the funding we need to efficiently remove previous cannabis crimes from people’s records and provide them the opportunity to repair their lives from the harm caused by cannabis criminalization. It is a critical step toward restoring the health of these individuals and the communities where they reside.”

“What we clearly see is that those left in the destructive wake of cannabis prohibition have been helped the least by cannabis legalization. Instead, we see a rapidly-growing industry that has largely left behind people and communities who disproportionately suffered under cannabis criminalization,” said Parton Lee, general counsel for Wyld.

“We are advocating for the use of cannabis tax dollars to help correct some of these long standing issues of inequity and provide for direct investment into people and neighborhoods most impacted by cannabis prohibition.”

State Rep. Julie Fahey helped drive the creation of the bill when she passed legislation in 2019 calling for a work group to develop a cannabis social equity program.

“This effort has brought together a diverse group of advocates, business owners, and industry partners to develop one of the most comprehensive equity bills in the country – breaking down barriers for BIPOC Oregonians and investing in the communities most harmed by cannabis criminalization. The cannabis industry is a driver of economic opportunity for entrepreneurs in our state, and this bill will help ensure that those harmed by the war on drugs have access to those opportunities,” said Fahey. 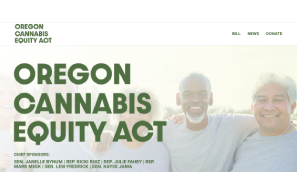