When Republican state senators walked out of the Capitol at the end of February to prevent a vote on a climate bill, they opened the door to uncertainty for hemp farmers.

Republicans’ continued absence jeopardizes passage of House Bill 4072, which would give the Oregon Department of Agriculture (ODA) the authority to conduct criminal background checks and other necessary requirements to comply with the Agriculture Improvement Act of 2018. The legislative session is scheduled to adjourn March 8.

“We’ve worked very hard over the past five years to develop the Oregon hemp program,” said Courtney Moran, attorney and president of the Oregon Industrial Hemp Farmers Association to the Capital Press, who is lobbying for the bill’s swift passage should Republican senators return. “We want to maintain that leadership.”

Oregon hemp farmers can grow hemp this year, and the ODA can continue regulating the crop under the Agriculture Improvement Act of 2014 until the bill expires Oct. 31, 2020.

After that, Oregon hemp farmers could come under direct oversight over the U.S. Department of Agriculture (USDA).  But that is a measure of last resort. Moran speculated that the governor could call a special session this summer and introduce a similar bill. The state could also seek an extension with the USDA in an attempt to prevent hemp production disruption. Beau Whitney, the founder and chief economist of Whitney Economics, estimated the 2019 Oregon hemp crop could be worth more than $1 billion.

Oregon has more acres devoted to growing hemp than potatoes and onions combined. As of Oct. 7 2019, the Oregon Department of Agriculture licensed 1,940 growers and slightly more than 63,000 acres of hemp, making it the second largest hemp growing state in the nation. 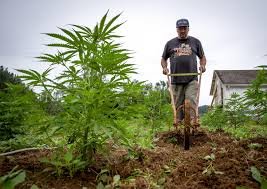