Oregon’s cannabis sales by county in 2020

The Business Journal’s annual analysis of data from the Oregon Liquor Control Commission showed that all but two of the 31 Oregon counties where cannabis is sold legally saw big gains in 2020. Statewide, combined adult-use and medical sales increased nearly 40% and topped $1.1 billion.

While it’s legal for Idahoans to buy cannabis in Oregon, it’s against the law for them to take it home. But that’s never seemed to dampen their enthusiasm for the Oregon product. It used to be that they’d drive 30 miles over the border to tiny Huntington, in Baker County, when it was the nearest locality that hadn’t barred sales. From 2017 through 2019, Baker held the unofficial title of “Oregon’s Highest County.” 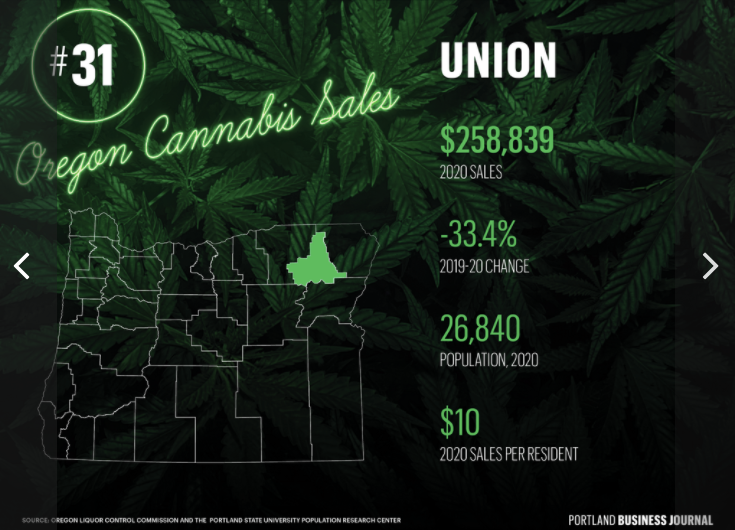 But in November 2018, Ontario voted to overturn its ban and get a piece of the action. The first store opened in July 2019, and the number grew to eight in 2020, leading to a 352% increase in sales. Despite accounting for 0.7% of Oregon’s population, Malheur County was home to more than 8% of the state’s legal cannabis sales last year.

It’s been a boon to Ontario: The city’s annual general fund budget of around $10 million is now supplemented with more than $2.5 million in revenue from a 3% cannabis tax.

While Malheur County was No. 1 on a per-capita basis, heavily populated Multnomah County was, as usual, the leader in the raw sales count, at more than $313 million.

There was interesting twist to the county’s sales in 2020, though: Around $58 million were to card-carrying medical marijuana patients, more than double the figure from 2019. That means that nearly one-fifth of cannabis sales in the county were medical — and thus untaxed. Elsewhere in the state, medical purchases made up just 6.5% of sales. 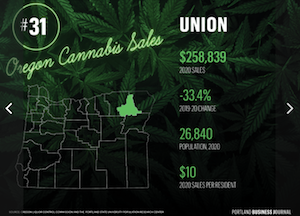