Efforts to clamp down on illegal cannabis cultivation in Southern Oregon could get attention from the federal government with the help of Congressman Cliff Bentz.

During a visit to the Rogue Valley this week, Bentz, Oregon’s only Republican U.S. House member who represents the second district, met with local law enforcement and legislators. They’re trying to create a plan to deter future illegal cannabis farming, which authorities say is associated with violence, intimidation and even murder in the area.

“I’ve been asking the federal government to go get us some help in the form of people to assist in shutting down these illegal grows,” Bentz said.

He has requested the attorney general’s office to send teams of up to 20 people from the FBI or DEA to Jackson, Josephine, Douglas and Klamath counties. His office has not yet received a response.

“I don’t think anyone has delusions that we’re going to completely eradicate this in one year,” said Jackson County Commissioner Rick Dyer. “We’re not going to be able to bust every illegal grow that’s out there. But to create that deterrent to make it uncomfortable, to make it unprofitable.”

During the meeting on Wednesday in Medford, Bentz asked the Jackson County sheriff, commissioners and legislators for more details on the murky cannabis situation in order to make a compelling case to officials in D.C. 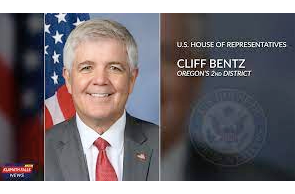