Intersting story and timely too. We presume most of our readers will have noticed the dispensary gold rush that is going on at the moment with multiple dispensaries opening daily around the US at the moment and what appears to be some quite predatory M&A in the dispensary space as a number of companies jockey to be state/ country leaders in dispensary(license) ownership.

At CLR we have had it in mind to work on a top 10 dispensary chains listing by number of outlets in the US . This story from NOCAL encourages us further.

Changes to regulation of retail cannabis sales in the city of Napa must be made thoughtfully or risk threatening the viability of the city’s existing dispensaries, those businesses say.

In February, Napa City Council voted unanimously to include Napa’s cannabis-selling ordinance on a list of six policy objectives to prioritize for 2021, according to Councilmember Beth Painter. The vote signals a relatively recent willingness on behalf of city officials to consider allowing recreational cannabis sales to adults over the age of 21, industry members say. Napa’s current ordinance permits only medicinal sales, for which customers need a physician-approved medical use card.

Though the “med card” requirement is less of an obstacle than it was five years ago – interested patients need no longer see a physician in person, and cards can typically be obtained quickly over the phone – it is still a headwind for Napa’s dispensaries, according to Micah Malan, co-owner of Abide, Napa’s fifth and most-recently opened dispensary.

“We turn away at least 10 people a day that come in for recreational (use),” Malan said. At a time when the dispensary is not reaching as many customers as it would like, that’s frustrating, he said.

Organic foot traffic is not a business model Napa’s dispensaries rely on, in part because their respective locations do not foster much of it. Napa’s dispensaries are medicinal-use only; they are subsequently permitted to operate in industrial-zoned portions of Napa, since that zoning use includes office and medical, Councilmember Painter explained.

Typically, patrons at Harvest House of Cannabis, located on Second Street west of downtown, are those who have sought the dispensary out, according to CEO Steve White. Though the business is by all appearances retail-based, Harvest is tucked between homes and autobody shops, nowhere near retail customer traffic generated by other retail businesses.

“You’d have to know what it is, and be looking for it,” Stephanie Honig, president of the Napa Valley Cannabis Association (NVCA), said of the dispensary. “They’re in the industrial area, when they should really be in the retail area … we really want to embrace the industry, and not hide it.”

Dispensary zoning and recreational sales have both become points of interest for NVCA, which has historically advocated primarily for commercial cannabis cultivation in Napa County, Honig said. 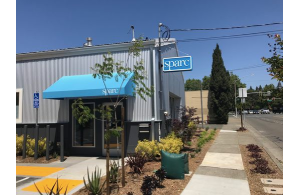