Panama: Medical Cannabis Sort Of On The Table In The National Assembly

After culminating yesterday the meeting of the technical table on bill No. 153, which regulates the medicinal use of cannabis, the plenary session of the National Assembly is preparing to resume its discussion in the second debate.

Yesterday, the sectors interested in the subject presented at the technical table the pros and cons of the 63 modifications that deputies of the Labor, Health and Social Development Commission – chaired by PRD Víctor Castillo – made to the project last week.

Castillo said that they hope to have a project that includes the criteria of all those involved and that is approved next week in a second debate by consensus of all the benches.

For his part, Carlos Ossa, multiple sclerosis patient and representative of the Searching Alternatives Foundation, who participated in the meeting, specified that they asked for a better analysis of the proposal that seeks to limit the number of production licenses to three companies.

“The demand must grow according to the needs of the patient and the doctors. If exclusivity of 3 licenses is left for 10 years, it is most likely that more patients and more doctors will need it, “he said, adding that there needs to be a local industry to grow and produce the drug and thus avoid price inflation.

But the Pharmaceutical College only wants it to be imported, and the deputies explained that the limitation of the licenses was made for security reasons, a source from the commission told this medium.

At the meeting, which lasted about two and a half hours, those present were not informed if their proposals would be taken into account, but Castillo said that “nothing is set in stone.”

Democratic Change deputy Alaín Cedeño, who also participated in the meeting and who has been a harsh critic of the limitation of licenses, said that at the table, outrage prevailed over this aspect.

The technical table was created precisely due to criticism for the changes introduced in the project, which had already been agreed for three years in the first debate. 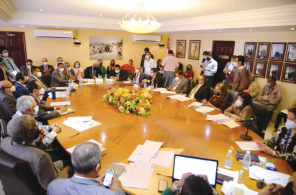