Schumer has been making waves on cannabis policy since he first introduced a bill to legalize marijuana in April 2018. It was part of his pitch for voting Democrat in the 2020 election, and now — with the majority in hand — he is putting together new federal marijuana reform legislation with Sens. Cory Booker (D-N.J.) and Ron Wyden (D-Ore.).

This week, Schumer’s home state of New York legalized marijuana use for adults, after years of failed efforts. More than 40 percent of Americans now live in states that have embraced full legalization.

President Joe Biden has been a conspicuous outlier among Democrats when it comes to supporting marijuana legalization. But Schumer said Biden’s reticence won’t deter the Senate from taking aggressive action to loosen federal restrictions.

“I want to make my arguments to him, as many other advocates will,” Schumer said in an interview with POLITICO this week. “But at some point we’re going to move forward, period.“

Schumer pointed to the decade-long experiment with state legalization as evidence that the worst fears of what would happen were overblown. “The legalization of states worked out remarkably well,“ he said. “They were a great success. The parade of horribles never came about, and people got more freedom.“ 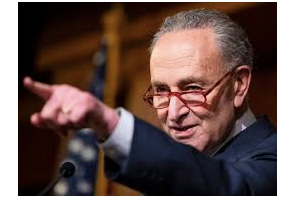